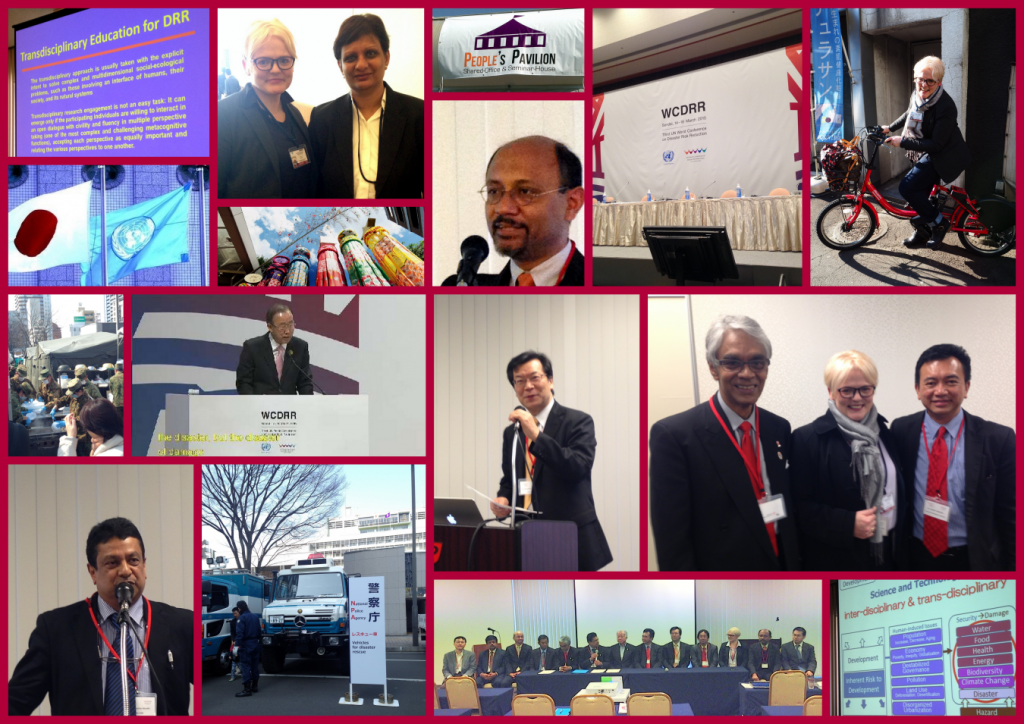 Ten years ago, the Second World Conference on Disaster Risk Reduction (WCDRR) was held just three short weeks after the 2004 Indian Ocean Earthquake and Tsunami that devastated coastal areas in and around the Indian Ocean. Held in January 2005 in Kobe, Japan and hosted by Hyogo Prefectural Government, the Second WCDRR resulted in the Hyogo Framework for Action 2005-2015: Building the Resilience of Nations and Communities to Disasters (HFA) to pay increasing attention and take action to reduce risk and increase resilience to natural and other disasters at the global level. Marking 10 years since the HFA was first implemented, the third WCDRR is also being held in Japan, and this time marks the fourth anniversary (11th March) of the Great Tohoku Earthquake and Tsunami, which devastated the Japanese coastal and inland areas of Tohoku. This was compounded further by the tsunami-induced Fukushima nuclear disasters. Over 20,000 lives were lost.

The goal of the Third WCDRR is to take stock of the accomplishments of the HFA and to set a new framework in place—the Post-2015 Hyogo Framework for Action. Before the conference started, there has been concern about the framework’s lack of alignment with climate-related UN processes such as the UNFCCC and IPCC given that, according to some researchers, the impact of climate-induced disasters has far exceeded other natural, non-climate change related disasters in recent years (see Singh’s blog at http://www.trust.org/item/20150313123238-emhaz  and the opening statement made by the UNFCCC President of COP21).  While references to climate change are found in the draft text, it is clear that the Post-2015 Framework will continue to rely on the UNFCCC and its subsequent actions on climate change. This said, it is the author’s impression that there should be more of an integrated approach among these UN bodies.

While climate change is mentioned throughout the text of HFA2 (Post-2015 HFA), there is an impression among many that the issue of climate change-induced disasters is not being considered as a key driver to the increased risk of disasters.

On Day Two, APN participated in the Transdisciplinary Education for Disaster Risk Reduction (Te-DRR) and provided a talk on APN and its transdisciplinary approaches to disaster risk reduction and drawing on its current draft 4th Strategic Plan (2015-2020), and its current Climate Adaptation Framework where 14 projects linking Disaster Risk Reduction, Climate Change Adaptation, and Loss & Damage are underway.

Te-DRR also introduced the new initiative of the UNU-IAS: INATE (International Network for Advancing Transdisciplinary Education). One of the key highlights was that accountability in the chain of processes of transdisciplinary work must be clearly identified throughout the different stages of any project in order to undertake effective coordination in this area. All stakeholders must be engaged from the outset. The panellists signed the declaration for INATE during the closing of the event. The Organisers of the Forum, Dr. Srikantha Herath and Dr. Kazuhiko Takemoto, are engaged in APN activities as members and as project leaders/collaborators.

APN had the opportunity to meet with UNFCCC’s Maki Kato and discuss APN’s potential involvement under the UNFCCC’s Climate Adaptation Programme as a regional research network. In addition, APN talked about commonalities in our work with Professor Rajib Shaw of Kyoto University and with other key participants from Japan, Sri Lanka, Malaysia and Thailand.

As the APN enters into a new strategic phase, more emphasis will be placed on linking global environmental change, including climate change, with disaster risk and resilience. It is with this background that APN had the opportunity to network at the conference and engage in a number of side events. For more information on the WCDRR, taking place from 14-18 January 2015, visit the main website at: http://www.unisdr.org/we/coordinate/hfa-post2015.