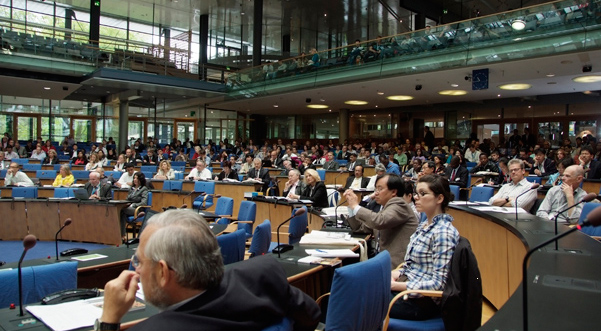 Over 900 scientists, journalists and leading representatives from the private sector, institutes, international organisations and NGOs, as well as government officials and decision-makers from various fields came to Bonn, Germany, for the International Human Dimensions Programme on Global Environmental Change (IHDP) Open Meeting 2009, “Social Challenges of Global Change“. These extremely varied backgrounds, both geographically and professionally, created a motivating and rewarding dialogue about the future global change research agenda. Scientists from more than 80 countries shared their knowledge during the conference.

The IHDP Open Meetings are the world’s largest international science conferences dealing with societal aspects of global change. The seventh meeting was held from the 26-30 April 2009, at the World Conference Center Bonn. The conference was one of the largest United Nations (UN) meetings in Germany in 2009 and was organised by IHDP.

The four days of the conference provided the participants with a variety of formats and opportunities for intense debates, ranging from high-level plenaries, 92 parallel sessions, about 400 papers and 25 special sessions and events, to a lively exhibition area for exchange and informal gatherings. The scientific agenda, set by the International Scientific Planning Committee, structured the conference according to four major “Social Challenges of Global Change”. It was a concerted effort to consequently address the broad scope of the human dimensions research agenda, which exceeds the “purely” environmental domain. It was intended to define these challenges in a way that they are both adding to and complementing established global environmental change research.

The presentation of IHDP’s core and joint projects was a crucial part of the conference. Their sessions represented real highlights of the IHDP Open Meeting 2009. Both the Global Environmental Change and Human Security (GECHS) and Industrial Transformation (IT) projects ran several sessions presenting their research findings, as both projects will come to a close in the next couple of months. Both projects provided enough time and space, using the presence of the international community at the conference, to explore ideas for future research directions. Established projects such as the Global Land Project (GLP), Urbanization and Global Environmental Change (UGEC) or the project on Land Ocean Interactions in the Coastal Zone (LOICZ) also presented their current research portfolio to the global community during several sessions of the conference.

New initiatives such as the Earth System Governance Project (ESG), Integrated Risk Governance (IRG-project) and, in a somewhat less advanced stage, Knowledge, Learning and Societal Change (KLSC) used the opportunity to kick-start their activities and to reach out to the wide audience present at the IHDP Open Meeting 2009. Among the parallel sessions, contributions from the ESSP partners, from IHDP national committees, well known research institutes, official “partners of the conference” and many more, secured scientific quality and a broad but clearly defined scope of the scientific agenda of the conference.

As the organiser of the conference, IHDP is very grateful to those who made this conference possible with the financial and in-kind contribution, such as the APN. One of IHDP’s major strategic goals is to build capacity in global change research worldwide. In this respect, the attendance of more than 80 scholars who were supported by the funds raised was an outstanding success on its own.

These scholars presented their research in the parallel sessions, and oftentimes in special events as well, for example, the follow-up to the International Human Dimensions Workshops (IHDW) seminars held last October in New Delhi. This aspect integrated a distinct capacity and network building component into the IHDP Open Meeting 2009.

Based on the current demand for human dimensions research on the one hand and the opportunities stemming from being a UN conference on the other, it was necessary that the IHDP Open Meeting 2009 reached out to policy makers and practitioners. A great example of this aspect, was the special roundtable on “Science for the 21st Century”, which stood out in its capacity to provide a platform for all parties to jointly discuss impending challenges in the field.

Connecting the Young and Experienced

Scientists from 31 to 40 years of age dominated the body of participants, with scientists from 41 to 50 years of age making up the second largest group present. In addition, more than 16 percent of the participants were students of different levels (Bachelor, Master, PhD). Of those participants who provided relevant information, 43 percent were female, highlighting a fair gender distribution among the delegates. These numbers show that the IHDP Open Meeting 2009 succeeded in attracting both the young and the experienced, so as to best provoke global discourses on the social challenges of global environmental change.

A significant number of the researchers who presented, 11.5 percent in all, received stipends, which partially secured their participation costs. The financial support IHDP was able to provide these scholars, was a major contributing factor to remarkable presence of scholars from developing countries at the conference.

The IHDP Open Meeting 2009 was the first Open Meeting conducted under the auspices of the IHDP Strategic Plan 2007-2015, and as such, contributed successfully to the implementation of IHDP’s strategic pillars on cutting-edge science, capacity development and science-policy interaction. It provided the human dimensions research community with enough food for thought, as well as a platform to form the many concrete research collaborations, which were initiated during these days. It clearly reassured the IHDP network of the importance of the human dimensions research agenda in times of rapid changes at all levels and motivated the increasingly forceful implementation of this agenda.