The APN had an active and strategic role at the recently concluded Biodiversity International Symposium with the theme “Biodiversity Crisis: Influence of Global Warming”. Mr. Tetsuro Fujitsuka, APN Secretariat Director, as a member of the Planning Steering Committee, was involved in the preparation and organisation of the event. He also coordinated one of the parallel sub-committee sessions and was a panellist in the plenary session. An exhibition allocated a space for the display and dissemination of APN materials and publications such as poster, flyer, brochure, annual report, project bulletin, etc. Some members of the APN Secretariat attended the Symposium and took the opportunity to showcase APN activities during the poster session at the exhibition booth.

This Hyogo Environmental Non-Governmental Organisation/Non-Profit Organisation (NGO/NPO) Symposium was organised by the Hyogo Environmental Advancement Association at the Okamoto Campus of Konan University, Kobe City, Japan on 11 October 2009. More than 200 people participated in the symposium including the civil society, environmental NGO and NPO members, experts, representatives from the industry and other private sector, and government officials. The symposium was organised in preparation for the 10 th Conference of the Parties to the Convention on Biological Diversity (COP 10/CBD) that will take place on October 2010 in Nagoya, Japan. 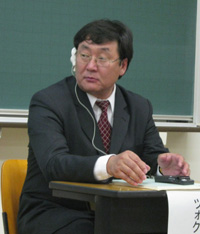 Recognising that biodiversity conservation is indispensable in planning and implementing measures to adapt to changing climate and its influences, the symposium aimed at engaging the participants in knowledge exchange and discussion and based on the information and views shared by many, made a proposal to the international society. Experts were invited to share their studies, researches and experiences related to biodiversity and global climate change. The APN Scientific Panning Group Member for Mongolia, Dr. Tsogtbaatar Jamsran (Director, Geoecology Institute, Mongolian Academy of Sciences) was invited to present on the “Impact of Climate Change on Forest Ecosystem and Biodiversity in Mongolia” and was one of the panellists too.

One point that was significantly stressed at the symposium is the importance of disseminating to citizens and local residents the information on effective conservation measures in format which can be used for practical purposes. It was also stressed that a framework for sharing information on the fragility of ecosystems needs to be established. It will be very useful to construct an international network that could provide information on a wide-range of biodiversity topics, including irreversible and sudden loss of ecological integrity and measures to conserve and maintain the ecological services continuously.

To lessen the impact of global climate change, the need for effective adaptive countermeasures and proactive strategies at local level were highlighted. International cooperation was seen very relevant means to promote these strategies, particularly for developing countries which are predicted to be susceptible to the impacts of global climate change. International network like APN is needed to strengthen the assistance provided to developing countries through facilitating the transfer of scientific knowledge and technology.

By actively participating in the symposium, APN has raised its profile and also able to contribute to the Hyogo Prefecture which is its major financial sponsor, in responding to ‘Biodiversity in Hyogo Strategy’ established by the Prefecture in 2008.