27 February 2019, Kathmandu — Government officials, academicians and scientists and experts from South Asia and West Asia meet at Kathmandu today at the Science-Policy Dialogue on the IPBES Asia-Pacific Regional Assessment for South Asia and West Asia subregions. The dialogue, hosted by the Government of Nepal’s Ministry of Forests and Environment (MOFE), is part of an initiative on “Capacity Building for the Implementation of the IPBES Asia-Pacific Regional Assessment – JBF-IPBES(C3)” supported by the Japan Biodiversity Fund under the Secretariat of the Convention on Biological Diversity (SCBD) and implemented by the Institute for Global Environmental Strategies (IGES) and the Asia-Pacific Network for Global Change Research (APN), in collaboration with the IPBES Secretariat and relevant IPBES technical support units.

The dialogue is primarily attended by national-level policymakers from countries in South Asia and West Asia, with participation of subnational decision-makers, local and international experts, and other stakeholders across the subregions. It aims to strengthen biodiversity science-policy interfaces through the uptake of the IPBES Asia-Pacific Regional Assessment (APRA) – with report of it providing critical assessment of several issues including the importance, status, trends and threats to biodiversity and nature’s contributions to people in Asia-Pacific, and information on appropriate response options. 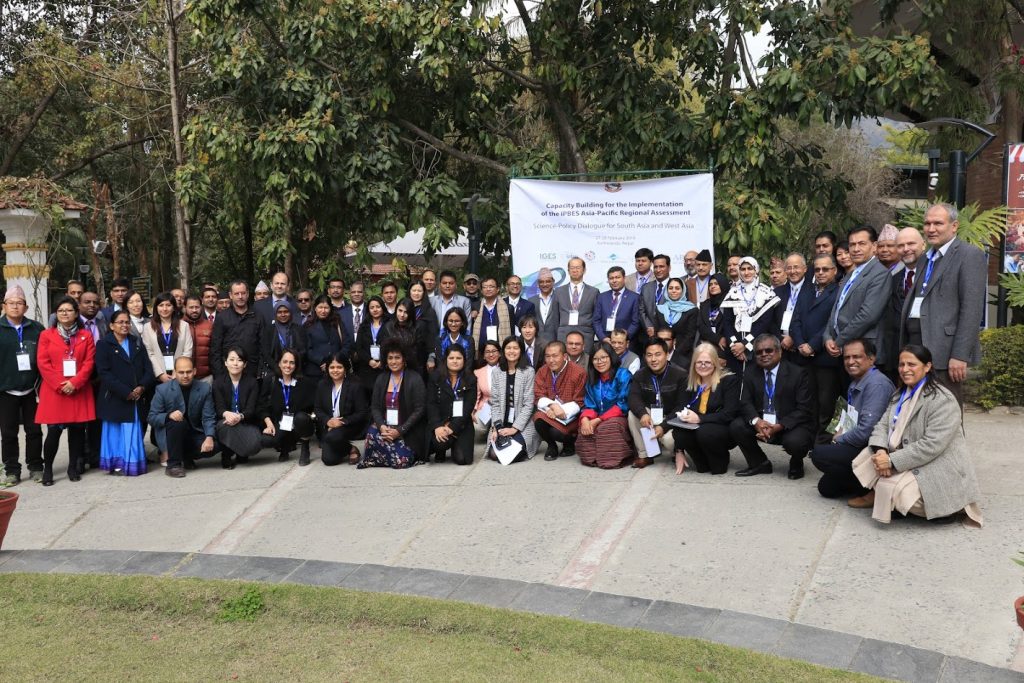 Secretary Bishwa Nash Oli provided a welcome remark expressing appreciation to all the delegates for coming and taking part in the science-policy dialogue. “Nepal, being a mountainous country in central Himalayas, harbours rich biodiversity due to its unique geography and varying climate; consequently, the country is fully committed to manage the country’s biological and natural resources as per national mandate and as biodiversity is closely linked to the livelihoods and well-being of most of the Nepalese people,” underscored Secretary Oli.

Immediately following the welcome remark was a presentation by Ms Naoko Nakajima, Director, Tokyo Sustainability Forum, Institute for Global Environmental Strategies, Japan, who introduced the JBF-IPBES(C3) Science-Policy Dialogues. She explained that this dialogue is a good opportunity to connect and support the region in understanding policy-relevant information such as key challenges from the IPBES Asia-Pacific Regional Assessment Report.

Dr Madhav Karki, co-chair of the recently completed APRA, provided his opening message underlining the invaluable information for policymakers contained in APRA report. He stated that the dialogue is a very important occasion in which science can be brought into the policy sector, and explained that based on the assessment, from 1990 to 2010, more than 4.5 billion people benefits from biodiversity and ecosystem services in the Asia-Pacific region. “This contributes to rapid average annual economic growth of 7.6% in the region, which in turn has had varying impacts on biodiversity and ecosystem services”, he furthered.

Honorable Dr Krishna Prasad Oli, Member, National Planning Commission, in a following opening remarks, underscored that Nepal has developed its Sustainable Development Goals (SDG) Roadmap and SDG implementation costings. The country is striving towards implementing SDG targets and is in the process of localization. Evidence-based policymaking is initiated and central emphasis is given for sustainable use of natural resources. “Science and data should be brought closer to the policymakers. The biggest challenges is how to actually bring science into policymaking,” he added.

Minister Shakti Bahadur Basnet, MOFE, Nepal, served as the chief guest of honor and thanked the Ministry of the Environment of Japan for the generous support given, through the SCBD, for the conduct of the dialogue. In his speech, he mentioned that in Nepal, forests and protected area system is a strong commitment of Nepal to biodiversity conservation. He highlighted that in science-policy dialogues, the aim is for government officials and other policymakers and key actors to acquire information in a form that they can understand which helps in creating improved policies, strategies, programs and projects directed at meeting global targets such the 2030 Sustainable Development Goals and in strengthening climate change adaptation and mitigation targets. “Success in science-policy work is achieved when a connection is made with those individuals and organizations that, in practice, have the ability to influence the outcomes of a policy decision”, emphasized Mr Basnet.

The dialogue features parallel knowledge café sessions and networking café stand to facilitate interactions in addition to the dialogue sessions. At the end of the two-day dialogue, it is expected that challenges and possible solutions on issues that are directly and indirectly touching on biodiversity and ecosystem services of the subregions are shared and discussed. The dialogue is also expected to provide an opportunity for policymakers in South Asia and West Asia to informally meet and interact with each other, receive information on the findings of the IPBES APRA, and get ideas on how to use IPBES products.