The Asia-Pacific Network for Global Change Research (APN) engaged in a dialogue with the global change (GC) community on emerging scientific findings and other developments in climate change research activities on 3 June 2010, during the 32 nd Session of the Subsidiary Body for Scientific and Technological Advice (SBSTA32) in Bonn, Germany.

Some 150 participants attended the SBSTA Dialogue on Developments in Research Activities Relevant to the Needs of the Convention. The session started with an overview talk by Prof. Rik Leemans, Chair of the Earth System Science Partnership (ESSP) Scientific Committee on climate change science issues; reducing uncertainty, attempting to establish tipping points, what are adaptation limits, etc. This was followed by two specialist talks, one on downscaling climate models and improvements in seasonal and decadal climate forecasting by Dr. Ghassem Asrar, Director of World Climate Research Programme (WCRP) and another on ocean acidification by Dr. Sybil Seitzinger, Executive Director of International Geosphere-Biosphere Programme (IGBP). A presentation by Dr. Ottmar Edenhofer, Co-Chair of Working Group (WG) III for the Intergovernmental Panel on Climate Change 5 th Assessment Report (IPCC AR5) on the structure of this report, the overwhelming support in terms of potential participation in its writing and the process that is being proposed to minimise errors in this next report and restore confidence in the credibility of IPCC climate science. 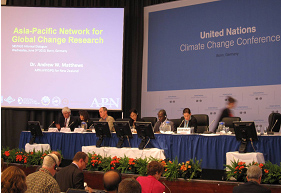 Three other presentations were given on regional climate change science and capacity building activities relevant to the Convention. Dr. Andrew Matthews, representing APN, led off this section of the Dialogue. He set the context for two new APN activities by stating that APN had just completed a strategic review of its programme and, in addition, was responsive to issues raised by the SBSTA32 and by the Copenhagen Accord. The two new programmes, launched in April 2010, of (1) activities relevant to ‘ Reducing Emissions from Deforestation and Forest Degradation (REDD/REDD-Plus) and (2) ‘Resources Utilisation and Pathways for Sustainable Development: Reduce, Reuse, Recycle (3Rs) and Material Flow’ have already generated considerable interest.

Dr. Matthews summarised the progress of projects under of the APN umbrella ‘Scientific Capacity Development for Climate Impact and Vulnerability Assessments’ (SCBCIA) that was announced at SBSTA30 last year. APN reported that with seven projects under SCBCIA, the activities are being conducted in China, Indonesia, Philippines, Pakistan, Viet Nam and Thailand. He pointed out that the importance of the involvement of developing country scientists in international climate research programmes and the need to train more scientists in developing states had been specifically mentioned by the delegations from Thailand and the European Union earlier in the week at this SBSTA meeting. Dr. Matthews concluded his presentation by stating that APN is proactive in its engagement with the Group on Earth Observations (GEO) and International Council for Science Committee on Data for Science and Technology (ICSU CODATA) on issues of data management, access and metadata. In closing, he highlighted that a regional climate synthesis report is being prepared by the APN, based on the outcomes of more than 50 climate-related projects that APN has supported over the last 10 years. It is envisaged that this publication will be peer-reviewed and published in time to be useful for AR5.

The APN presentation was followed by a presentation by Dr. Elizabeth Lipiatou, from the European Commission Research Directorate-General on climate change regional projects in the EU Seventh Framework Programme and then a report by Dr. Jon Padgham of Global Change System for Analysis, Research and Training (START) International, on their ‘Science Dialogues’ programme in developing states, particularly Africa. The formal presentations concluded with country contributions from Belize, European Union, Japan, Mali, and the United States.

The Chair then took questions from the floor and the participants said how pleased they were to have had the opportunity to see the presentations and participate in the dialogue and encouraged SBSTA to continue this activity.