13 December 2012, Tsukuba, Japan – The Low Carbon Asia Research Network (LoCARNet) In-Depth Meeting on Strategic Action Plan was organized by the LoCARNet secretariat on 13 December 2012 at the National Institute for Environmental Studies (NIES) in Tsukuba, Japan. The meeting was financially supported by APN as a networking activity under its Low Carbon Initiative (LCI).

The objective of the meeting was to further develop the Strategic Action Plan of LoCARNet for the period between fiscal years 2012 and 2014 as the first phase and beyond 2014 in longer term. The Strategic Action Plan contains the following elements: membership, term of the plan, prioritized activities (low carbon research, capacity building, etc.), the steering group, the secretariat, fundraising, and the way forward. 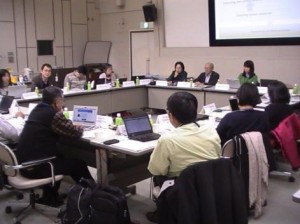