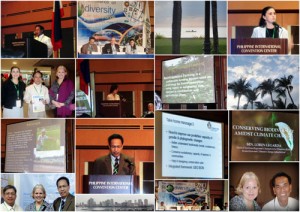 The International Conference on Biodiversity and Climate Change (ICBCC) is being held at the Philippine International Convention Center (PICC), Manila, Philippines to share knowledge and information on the two-way interactions of biodiversity and climate change and to identify strategies and actions to conserve biodiversity. O riginally scheduled on 17-19 November 2010, the conference has been rescheduled on 1-3 February 2011 to coincide with the celebration of the World Wetlands Day. The Commission on Higher Education (CHED) and the Department of Environment and Natural Resources (DENR) are jointly organising ICBCC, in collaboration with the United Nations Development Programme (UNDP), National Economic Development Authority (NEDA), International Programme of Biodiversity Science (DIVERSITAS), ASEAN Center for Biodiversity (ACB), World Wildlife Fund (WWF), Commission on Climate Change (CCC), Protected Areas and Wildlife Bureau, Philippine Council for Agriculture, Forestry and Natural Resources Research and Development (PCARRD) and the Philippine Council for Aquatic and Marine Resources Research and Development (PCAMRD).

The United Nations General Assembly proclaimed the year 2010 as the International Year of Biodiversityon 12 January 2010. This proclamation is significant because at this time climate change has become a key issue faced by all nations of the world. It is believed that the abiotic changes on earth such as temperature rise, sea level rise, ocean acidification, extreme weather phenomena, etc. assumed to have been caused by the rapid increase of greenhouse gases in the atmosphere, can impact on biodiversity and society.

The Philippine government as a party to the United Nations Framework Convention has legislated Republic Act No. 9729, known as the Climate Change Act of 2009, which will mainstream climate change in government policies. The Philippine President has issued an Executive Order No. 774 mandating higher education institutions (HEI) to update listings of Philippine biodiversity and create databases. A CHED research programme dealing primarily, or in part, with biodiversity has been implemented since last year.

The objectives of the Conference are to:

Paper presentations and discussions are focussing on the following themes:

More information will be made available on the website in due course and highlights of the Meeting as well as key outcomes will be featured in the next edition of the APN Newsletter.