The LoCARNet is a network of research community and stakeholders aiming to facilitate the formulation and implementation of science-based policies for low carbon development in Asia. Following a proposal by the government of Japan to establish an Asian research network on low carbon research at the ASEAN+3 Environmental Minister’s Meeting, Phnom Penh, Cambodia in April 2011, the LoCARNet was launched in April 2012 at the East Asia Low Carbon Growth Partnership Dialogue, as a part of the East Asia Knowledge Platform for Low Carbon Growth.

APN provided financial support for the meeting as part of its networking activities under the newly launched Low Carbon Initiatives programme. More than 100 officials and experts from governments, research community, international and regional organizations and other stakeholders in and outside of Asia participated in the meeting to exchange their knowledge related to low carbon society.

At the opening session, Mr. Spachai Watanangura, Board of Directors of TGO and Mr. Soichiro Seki, Director General of Global Environment Bureau of MOEJ made statements and acknowledged the APN for its financial support to LoCARNet. Dr. Shuzo Nishioka, Secretary General of LoCARNet introduced the background, possible activities and his ideas on the way forward. 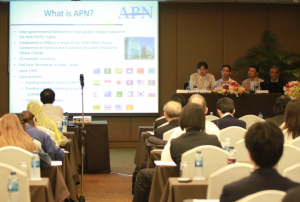 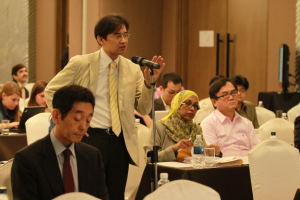 In Day2, a dialogue between researchers and policymakers was held to discuss science-policy interaction, followed by another dialogue with stakeholders for discussing how LoCARNet will network with relevant organizations and what LoCARNet will do in the future. Dr. Akio Takemoto, Director of the APN Secretariat, participated in the panel discussion of this dialogue and introduced APN framework and the Low Carbon Initiative, a new APN programme to support regional research and capacity building activities in member countries. Drawing experience learned from the 16-year history of APN, he suggested LoCARNet develop a strategic plan which includes common vision, missions and action plans in order to promote LoCARNet sustainably. He also suggested LoCARNet should develop partnerships with other organizations and networks to create mutual benefits.

At the wrap-up session, the LoCARNet Secretariat summarized key findings and concluded that these findings would be incorporated into the action plans of the LoCARNet.