In taking active role at the United Nations Convention on Biodiversity 10 th Meeting of the Conference of the Parties (UNCBD COP10), in Nagoya, Japan, 18-29 October 2010 and to celebrate the 2010 International Year of Biodiversity, the APN, in collaboration with the Hyogo Prefectural Government, Japan and other key partner organisations, is conducting side-events and exhibit to promote APN activities in the region that contribute to biodiversity conservation and sustainable development.

The CBD is the first global agreement on the conservation and sustainable use of the rich biological diversity of life on Earth. This international treaty was signed at the ‘Earth Summit’ in 1992, the largest-ever meeting of world leaders which convened at the United Nations Conference on Environment and Development in Rio de Janeiro, Brazil. Around 150 governments signed the document at the Rio Conference and since then, with rapid and widespread acceptance, 192 states and the European Union are now party to the CBD. With the heightened concern about environmental destruction and loss of species and ecosystems and to contribute in reducing the current rate of biodiversity loss, the APN is committed to supporting the Parties to the CBD and joining other partner organisations in safeguarding biodiversity through the promotion of related research and capacity development activities.

On 24 October 2010, the APN is holding a Biodiversity Interactive Forum at Nagoya Gakuin University. Three Japanese experts are invited to talk about the Non-Governmental Organisations/Non-Profit Organisations (NGO-NPO) initiatives on safeguarding biodiversity in Hyogo Prefecture. Mr. Kazuhiko Takemoto, APN Secretariat Steering Committee Member and Senior Adviser to the Minister, Ministry of the Environment, Japan (MOEJ) will facilitate this Forum.

A side-event entitled ‘Towards Biodiversity Conservation and Sustainable Development of Forests in the Asia-Pacific Region’ will convene on 25 October 2010 at the Nagoya Congress Center. The APN is co-organising this event with the Hyogo Environmental Advancement Association (HEAA). Three expert presentations from local and abroad and a panel discussion will compose the side-event.

Of the three expert presentations, Dr. Chimednyam Dorjsuren, National University of Mongolia will introduce the joint reforestation project of HEAA and Mongolian Forest Forum. A report about the importance of symbiosis between fungi and trees and how to use this symbiosis for a sustainable forest development will be presented by Prof. Koji Iwase, Tottori University, Japan. APN’s contribution to the international Forestry Agenda will be summarised by Dr. Linda Anne Stevenson, APN Secretariat, in her presentation.

The three invited presenters will lead the panel discussion, together with Dr. Henry Scheyvens, Natural Resources Management Group, Institute of Global Environmental Strategies (IGES). Prof. Hisakazu Kato, Teikyo University, Japan will give the welcome and opening note as well as the closing remarks.

On 26 October 2010, another side-event, being co-organised by APN and the Hyogo Prefectural Government, will convene at the Nagoya Congress. Dr. Tsogtbaatar Jamsran, APN Scientific Planning Group (SPG) Member for Mongolia will give a presentation highlighting joint efforts of the Hyogo Prefectural Government and APN in safeguarding biodiversity in the Asia-Pacific region. 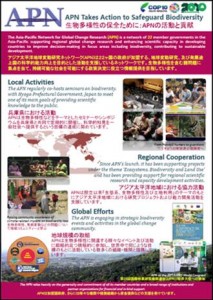 An expert from the Hyogo Prefecture will showcase Hyogo’s biodiversity conservation efforts such as the reintroduction of Oriental White Storks into the wild. Another invited expert will share about Satayoma Initiative at the local level. Satoyama, a Japanese term referring to socio-ecological production landscapes formed through harmonised human-nature relationships, exist in various part of the world. The presentation will focus on ‘Hyogo method’ of conserving the ecosystems and addressing the environmental pressures.

As the environmental situation is becoming more severe and with Japan’s call to global warming prevention that also affects biodiversity, it is also interesting to note that the Hyogo Prefecture has pledged to reduce carbon dioxide emissions (CO 2) by 6% from the 1990 level by 2010. In the industrial sector, emission reduction projects are being promoted in major companies and, for the household sector, the Institute for Global Environmental Strategies (IGES) has developed software called ‘Eco-Home Diagnosis’ Program, which is being used to analyse sources and quantities of CO2 emitted per household in order to provide customised measures for CO 2 reduction. More local initiatives in tackling environmental issues related to biodiversity conservation will be highlighted at the side-event.

Information materials such as posters, bulletins/policy briefs and CD-ROMS were published/prepared for display and wide dissemination at the APN designated b iodiversity interactive fair (booth). A poster, side-event flyer and bulletin/policy brief were designed specifically for the event. Please join APN in the side-events and visit the APN booth at Shiratori Park.