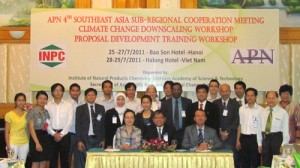 In his opening address, Dr. Xuan Bao Tam Nguyen, Deputy Director General, International Cooperation Department, Ministry of Natural Resources and Environment, Viet Nam and APN nFP for his country, welcomed the participants to this meeting and its back-to-back workshops, and expressed his hope that the meeting will contribute to enhancing the cooperation within the APN Southeast Asia sub-region members and young scientists.

She welcomed all participants and expressed her sincere appreciation to the nFP and SPG member for Viet Nam for organizing the 3 back-to-back meetings and noted it was good to be back in Hanoi, following the last APN Meeting held there in 2003, which was the 8 th Inter-Governmental Meeting.

Dr. Stevenson noted that she was excited to have many young scientists present in Viet Nam and expressed her hope that they would find the Climate Change Downscaling Workshop and Proposal Development Training Workshop useful for their future work with the APN and for strengthening interactions with colleagues from respective Southeast Asia Countries.

Dr. Kim Chi Ngo, Head of INPC-VAST and APN SPG Member for Viet Nam was elected Chair of the two-day meeting, and will preside over the discussion of follow-up actions agreed upon in the last Southeast Asia Sub-Regional Meeting held in Manila, Philippines in November 2010, and those during APN’s 16 th Joint Inter-Governmental Meeting/Scientific Planning Group Meeting (IGM/SPG) held in Colombo, Sri Lanka.

Among other issues, the meeting will discuss activities for Southeast Asia sub-regional cooperation at both the national and local levels and global environmental issues in Viet Nam and other countries in the region.

In a country reporting session on day two of the meeting, participants will report on their countries efforts on climate change and adaptation, the Rio+20 process and sustainable development, as well as challenges and opportunities for science-policy linkage.

To be conducted back-to-back with the Fourth SEA-SRC Meeting will be a Climate Downscaling Workshop from 26–27 July and a Proposal Development Workshop from 28–29 July.

Invited experts to the Climate Downscaling Workshop will discuss key issues on climate change projections with scientific evidence and adaptation actions; promote scientific-based analysis by using downscaling methods to inform science-based adaptation planning in SEA, especially in Vietnam, and raise awareness of the APN among young/early career scientists in the Southeast sub-region of the Asia-Pacific.

– The Proposal Development Training Workshop (PDTW)
A signature activity organized by the APN Secretariat, the PDTW has been a great success since its inception in 2008 in helping early-career scientists in the Asia-Pacific region to increase their capacity to develop competitive proposals to APN for its Annual Calls for Proposals in key scientific areas identified by the APN.

Over 20 young scientists from Viet Nam and other Southeast Asia countries will be briefed about APN’s Annual Calls for Proposals process, guidelines and advice on proposal writing, and the review and selection process.

Each young scientist will have the opportunity to develop, in collaboration with his/her peers and mentors in pre-assigned groups, a proposal under a specific topic for oral presentation, which will be followed by a group discussion and evaluation among all participants.