As climate issues are becoming more relevant and pressing these days, the APN is conducting a two-year Synthesis Activity on APN and Climate Change: Perspectives from Asia and the Pacific, which officially kicked-off in a Scoping Meeting held at the APN Secretariat in Kobe, Japan on 10-11 November 2009. 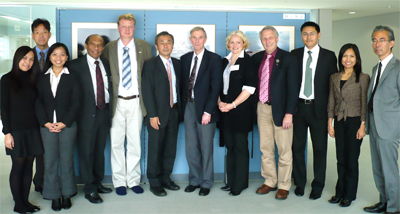 Scientific understanding of climate change is advancing at a significant rate, with new information emerging about the likely impacts of climate change, the options to adapt to these changes, and new approaches to mitigate the impacts. Through many national and international fora, it is becoming clear that climate is one of the most, if not the most, pressing issues in the political and scientific arena today. The recent 34 th Group of Eight (G8) Toyako Summit underscored its commitments to climate change, adaptation and mitigation as well as the need to support developing countries for financing, transferring technology and capacity building activities for these nations to be able to respond effectively to climate change. Over the years, APN has been supporting projects in which climate change is featured as a major theme

Overview of the Synthesis Activity

This APN activity is part of its stronger effort to contribute, from the science perspective, to the development of policy options for appropriate responses to global change that will also contribute to sustainable development. The Synthesis will review all APN projects and other related activities on climate change and their contribution to the challenges being faced by the global community in the light of changing climate. This hopes to identify knowledge gaps and help prioritise research goals and programmes relating to climate change in the Asia-Pacific region as well as provide knowledge on climate change issues for policy- and decision-making. The expected outcomes of this activity are a synthesis report and an academic book which are aimed to be published in 2011 and 2012, respectively; prior to the publication of Intergovernmental Panel on Climate Change Fifth Assessment Report (IPCC AR5). The Scoping Meeting was attended by a number of reputable scientists in the region namely: Dr. Lance Heath from Climate Change Institute, The Australian National University; Prof. Kanayathu Koshy from Centre for Global Sustainability Studies Universiti Sains Malaysia; Dr. Michael Manton from School of Mathematical Sciences, Monash University in Australia; and Dr. James Salinger from School of Environment, University of Auckland in New Zealand. Three more respected scientists in their fields of expertise who could not join the Scoping Meeting agreed to actively take part in the succeeding activities of the Synthesis Team. They are: Dr. Srikantha Herath from Environment and Sustainable Programme, United Nations University; Dr. Rodel Lasco from World Agroforestry Centre; and Dr. Anand Patwardhan from Technology Information Forecasting and Assessment Council (TIFAC) of the Indian Ministry of Science and Technology.

Looking Back and Looking Ahead

The current Climate Synthesis is the third APN synthesis activity. The two previous syntheses are on “Land-Use Cover Change: An Initial Synthesis (2003)” and “Global Change and Coastal Zone Management: A Synthesis Report (2004)” The latter synthesis resulted in a number of citations in the IPCC Fourth Assessment Report (AR4) as well as the publication of APN’s first book on “Integrated Coastal Zone Management” published by Springer in 2006. The APN looks forward to the two-year challenging work ahead and feels confident that with the input from the Synthesis Team, this activity would be another resounding success.