Realising its strong position to contribute at the Intergovernmental Science-Policy Platform on Biodiversity and Ecosystem Services (IPBES), the APN attended the IPBES 3 rd Ad-hoc Intergovernmental and Multi-stakeholder Meeting, 7-11 June 2010, Busan Republic of Korea. There are potential synergies for APN’s future engagement with IPBES as the Platform emphasised on Capacity Development which is a strong pillar of APN activities. Below is a report from Dr. Linda Anne Stevenson who participated in the Meeting on behalf of the APN.

Introduction: What is IPBES?
If established, an IPBES will be an IPCC-like mechanism for biodiversity and ecosystem services. The new panel would provide a long overdue forum in which scientists engaged in research on biodiversity and ecosystem services, and their links to economics and human wellbeing could provide policy makers and other stakeholders with the independent, authoritative, peer-reviewed scientific information needed to promote more sustainable, nature-friendly development. The panel would provide regular assessments of the condition of, and trends in, biodiversity and ecosystem services, and develop a common terminology and indicators. It could also organise information by biome – enabling research and exchange between scientists and policy makers for ecosystems such as grasslands, mangroves, woodlands or deserts. Such a panel could also improve knowledge on the links between climate change and ecosystem change, and facilitate sharing of ecosystem management and climate change adaptation strategies. To be truly effective, however, the panel must bridge the institutionally divided worlds of environment and development. The information it generates must serve the decision-making needs of national ministries of finance, planning, agriculture, forests, fisheries and energy.

Opening of the Meeting
The third ad hoc intergovernmental and multi-stakeholder meeting on an intergovernmental science-policy platform on biodiversity and ecosystem services (IPBES) opened on Monday 7th June in Busan, Republic of Korea. 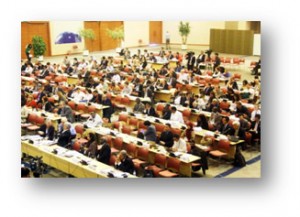 Achim Steiner, United Nations Environment Programme (UNEP) Executive Director, identified two key roles for an IPBES: providing a platform for intense dialogue and collective action needed to achieve an urgent and significant shift in addressing biodiversity loss; and enhancing the capacity of developing countries to contribute to global efforts. Lee Maanee, Minister of Environment, Republic of Korea, summoned delegates to support the establishment of an IPBES, promising that in the future the international community will remember them as “the heroes of that moment.” Hur Nam-sik, Mayor of Busan, expressed the hope that this meeting would strengthen international cooperation on biodiversity. The elected Chair and Vice-Chair were Mr. Chan-woo Kim, Director-General, Ministry of Environment, Republic of Korea, and Dr. Robert T. Watson, Chief Scientist and Director for Sustainable Development at the World Bank, respectively.

Highlights of the Meeting
In the afternoon of day one, delegates considered options for:

On day two, delegates nominated Dusan Ognjanovic (Serbia) as fourth vice-chair and during the day reviewed options for: the function, or work programme, of a new platform. On Wednesday, after hearing the reports from the drafting group on the Busan outcomes document and from the contact group on options for processes, IPBES III participants engaged in negotiation on text for the function or work programme of the new platform. In the afternoon, delegates continued negotiating text on assessments, policy formulation and implementation, and building capacity. 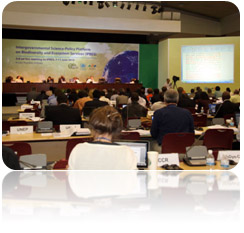 Two contact groups met during the day to forward discussions on the function or work programme of the new platform and on outstanding issues on generation of knowledge and regular and timely assessments; its legal basis, governance and implementation structure; funding; and need for, location and host of a secretariat. They also engaged in a second reading of the processes that a new platform should support. A drafting group on an outcomes document and a contact group on options for the processes convened in the evening.

On Thursday morning, IPBES III participants negotiated text: on building capacity and funding; and on negotiated text prepared by the Contact Group on processes that a new platform should support. At the end of the morning session, the chair convened a “friends of the chair group” to draft text on the chapeau and announced that the drafting group would meet to discuss the structure of the outcomes document. In the afternoon and into the evening, negotiations continued on the legal status of an IPBES, the draft Busan outcome document and its chapeau.

Conclusion of the Meeting
After another long day of negotiations, the Secretariat introduced the draft Busan Outcome, which was adopted with some amendments. On the role of UNDP, after some debate, delegates agreed to note the interest of UNDP in IPBES and its important role in capacity building. Delegates also agreed to introduce language whereby they “conclude” that an IPBES should be established to strengthen the science-policy interface for the conservation and sustainable use of biodiversity, long-term human wellbeing and sustainable development.

After a brief consultation, Australia and the EU proposed that the UN General Assembly be invited to consider the conclusions of the meeting and, in the spirit of compromise, Kenya withdrew its proposal. In the text agreed by the plenary, it is recommended that the UN General Assembly is invited to consider the conclusions and the UNEP Governing Council invites UNEP, with UNESCO, FAO and UNDP, to continue facilitating the process.

Busan Outcome
The representatives of the governments to IPBES III, inter alia:

On consideration of the function of an IPBES, the representatives of the governments to IPBES III agreed that it should:

They also agreed that the plenary should: be open to participation by all member states of the UN and regional economic integration organizations; and in general take decisions by consensus by government representatives; have one chair and four vice-chairs, ensuring geographic balance; and establish a core trust fund to receive voluntary contributions from governments, UN bodies, the GEF, other intergovernmental organizations and other stakeholders, such as the private sector and foundations.
According to the principles expressed in the Outcome, an IPBES should, inter alia:

The representatives also agreed that the efficiency and effectiveness of an IPBES would be independently reviewed and evaluated on a periodic basis. They recommended that: the UN General Assembly be invited to consider the conclusions of the meeting and take appropriate action for the establishment of an IPBES; and the UNEP Governing Council invites UNEP, in cooperation with UNESCO, FAO and UNDP, to continue to facilitate any ensuing process of implementing the IPBES until such time that a secretariat is established.

Closing
During the closing plenary late Friday evening, Chair, Mr. Chan-woo invited delegates to adopt the Busan Outcomes document. Rapporteur Spencer Thomas (Grenada) then presented the report of the meeting (refer to IPBES/3/L.1), which was adopted by acclamation.
Vice-chair Mr Watson applauded delegates for their flexibility and spirit of compromise, noting this agreement puts the governance of biodiversity and climate change on an equal footing. The EU expressed satisfaction with the successful outcome and noted that several member states and the European Commission have indicated their willingness to provide funding and institutional support for the new platform. Norway offered to host a secretariat on capacity building, while Kenya called for the IPBES secretariat to be hosted at UN headquarters in Nairobi. The Republic of Korea pledged to contribute to the successful launch of the IPBES and beyond.

Chair Mr Chan-woo thanked all delegates for finalizing this historic agreement in Busan in the International Year of Biodiversity and, noting the participants as “heroes of the moment “brought the meeting to a close at 22:51.

(note that some of the above excerpts were taken from the ENB Bulletins).