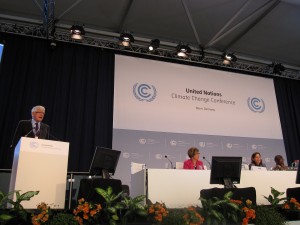 Below is an excerpt from the IISD Earth Negotiations Bulletin.

Sybil Seitzinger, International Geosphere-Biosphere Programme (IGBP) and the World Climate Research Programme (WCRP) said that, based on regional reconstructions, a sharp rise in mean temperature records is occurring. She said it is possible to limit the global temperature increase to 2ºC if short-lived climate pollutants are tackled. She reported on a new inclusive wealth index that considers a sustainability approach.

Participants discussed, inter alia, the feedback effects of the carbon cycle, non-temperature effects of short-lived climate pollutants, the role of black carbon in mitigation, and seismic events, such as tsunamis.

Dmitry Zamolodchikov, the Russian Federation, presented on the management of ecosystems based on Russian cases, saying that human and climate-induced changes have a relevant impact on GHG emissions.

In ensuing discussions participants addressed, inter alia: the need for an overview of carbon fluxes; possibility of developing robust methodologies for REDD+; and integration of knowledge in policy-making and collaboration. 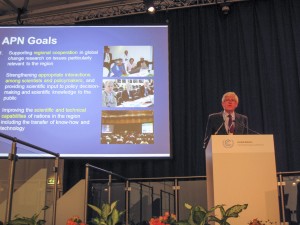 Cynthia Rosenzweig, for Programme on Research on Climate Change Vulnerability, Impacts and Adaptation (PROVIA), highlighted identification and synthesis of research priorities to support policy decision-making. She underscored plans to develop tracking systems to identify research gaps for the preparation of the IPCC’s sixth assessment report.