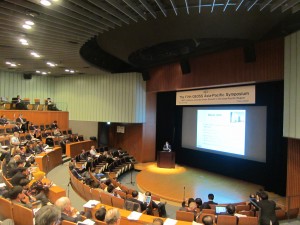 4 April 2012, Tokyo, Japan — The APN was represented at the Fifth GEOSS Asia-Pacific Symposium which was held in Tokyo, Japan, from 2 to 4 April 2012. More than 200 participants from over 20 countries participated in the event.

Keynote speakers addressed the major climate issues emerged after the great East Japan earthquake and tsunami in 2011 and lessons learned from the disaster. Countries reported on the progress they made in implementing GEOSS since the last Asia-Pacific Symposium in Indonesia. The symposium is expected to further strengthen international networking within the region and share the Asia-Pacific’s experiences with the world. The participants issued a “Tokyo Statement” to call for upon the upcoming United Nations Rio+20 Conference on Sustainable Development to recognize the critical role of Earth observations for informing an economy based on Green Growth. 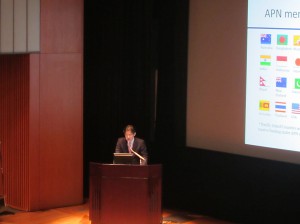 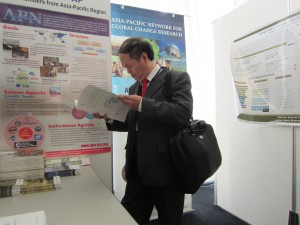 Dr. Akio Takemoto, Director of the APN Secretariat participated as an invited speaker at the session on Country and Regional Reports on GEOSS-Related Activities. He gave a brief introduction to the APN, its new focussed activities in 2012 and recent publications. In particular he highlighted APN’s involvement in the GEOSS process and related activities to date. Dr. Takemoto also briefed on the outcomes of the “Planet Under Pressure” Conference that he participated in before joining the GEOSS Asia-Pacific Symposium.

The APN presented its recent work and distributed latest publications through an exhibition in the symposium. The recently published Climate Synthesis report was among the eye-catching publications welcomed by the audience.